when i installed its on my game version 1.25 notified me that texture for... 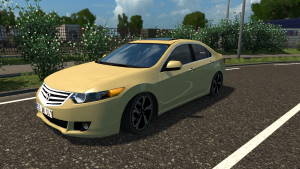 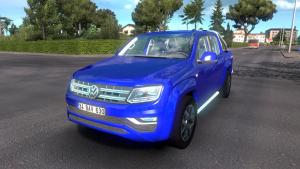 The mod of the German Volkswagen Amarok passenger car in the back of a pickup truck in the ETS 2 simulator is presented in two versions, standard and off-road versions with 4x4 all-wheel drive. Of the power units, the authors of the modification implemented two engines with a capacity of 160 and 170 horsepower and a single six-speed gearbox. Particular attention can be paid to a highly detailed model of the body with the interior, as well as branded wheels with ordinary and off-road tires. 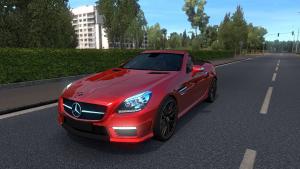 The prestigious passenger car Mercedes-Benz SLK 55 AMG is now also on the virtual roads Euro Truck Simulator 2. The Mercedes passenger car mod was created using a high-quality three-dimensional model, equipped with a 422 horsepower engine and a six-speed gearbox on the technical part. Unfortunately, the possibility of external tuning is completely absent, however, a well-designed interior with animation will alleviate this drawback. 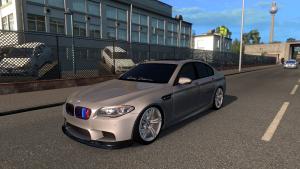 The mod of the sports version of the fifth-generation passenger car BMW M5 F10 has pretty good optimization, the developers of the add-on have implemented their own characteristics and a set of genuine sounds, which will be a pleasant surprise for ETS 2 sim players. Of the power units, an engine with a capacity of 575 horsepower and a seven-speed gearbox are installed. In addition, a small set of items for external tuning has been added. 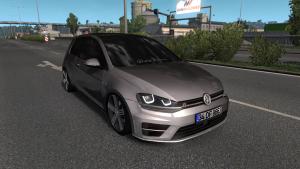 The popular seventh-generation Volkswagen Golf car in the R-Line configuration, which has been produced since 2012, has now appeared on the ETS 2 virtual roads. The mod of the Volkswagen passenger car is of decent quality, the authors implemented a signature interior of the cabin with animation, an original engine with a capacity of 310 horsepower with own set of sound effects and a six-speed gearbox. 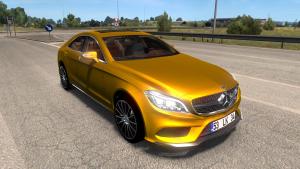 Elite passenger car Mercedes-Benz CLS 350d 4Matic in the back of a four-door coupe in the simulator ETS 2 has a realistic appearance, the authors have implemented their physics, bringing the virtual game world to reality. Mod passenger car Mercedes has no possibility of tuning, the technical part implemented two engines with a capacity of 160 and 225 horsepower with its own sounds and a pair of gearboxes for six and eight speeds. Special attention should be paid to the luxurious leather interior in two colors. 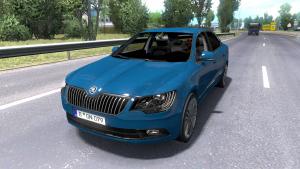 Another mod passenger car Skoda SuperB for Euro Truck Simulator 2. This time the version of modification RS Xtreme mapinally differs from similar additions of the car Skoda, more qualitative execution. The car is equipped with a standard suspension, four interior options, seven engines from 125 to 260 horsepower with genuine characteristics and a six-speed transmission. There is a possibility of arrangement on a roof of special light devices, skins of police and service of the airport are added, and also possibility of tuning. 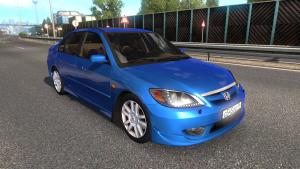 Popular Japanese passenger car Honda Civic has repeatedly been ported by the authors of modifications in the simulator ETS 2. This time we have a mod car Honda, made in the highest quality. As a basis, the developers took the original highly detailed three-dimensional model, implemented the original interior with full animation, three types of suspensions, a pair of engines with 110 horsepower with its own sounds, a five-speed gearbox and a rich set of elements for tuning. 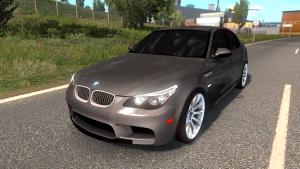 In Euro Truck Simulator 2 there is a new passenger car business class BMW M5 E60 from German manufacturers. Mod passenger car is made using high-quality three-dimensional model of the body. There is a branded fully animated interior in several color options of seats and panels. On the technical side, two engines with a capacity of 507 horsepower with a set of their own sound effects are implemented. In addition, there is a rich Arsenal of accessories for tuning. 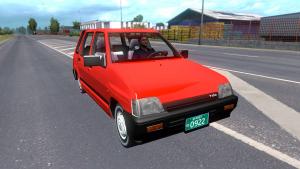 Korean passenger car Daewoo Tico has once been ported to older versions of Euro Truck Simulator 2, and the authors of the modification decided to upgrade the addition to the current version of the game. Mod passenger car is equipped with standard suspension, engine capacity of 170 horsepower and six-speed transmission. Recreated classic interior with working animation devices, original wheels, private rooms and the possibility of painting the body in any color. 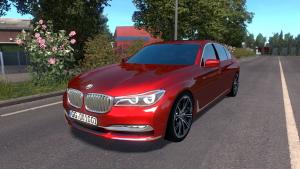 The BMW 750ld xDrive Executive German sedan in the ETS 2 simulator has a photographically accurate appearance, providing greater realism. Mod passenger car has an original appearance and interior, equipped with a powerful engine and a six-speed transmission with genuine high-speed characteristics, allowing the player simulator ETS 2 feel behind the wheel of a sports car. For transportation of light trailers under the rear bumper there is a special trailer device.