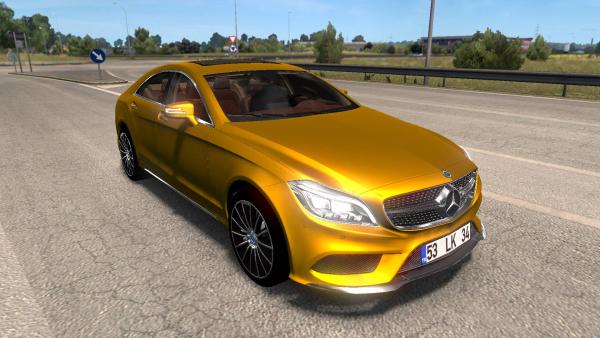 Luxury passenger car Executive class Mercedes-Benz CLS 350d 4Matic in the body of a four-door coupe was produced in the period of the German concern Mercedes from April 2015 to October 2017. The car is built on a new platform, has many similarities with the MB C63 AMG and combines components from the E-Class and S-Class.

Mod passenger car Mercedes-Benz CLS 350d 4Matic for Euro Truck Simulator 2 has a high quality performance. Special attention should be paid to the luxurious leather interior, the color finish of which can be selected when buying a car or its modernization in any garage simulator ETS 2. Unfortunately, the modification, in addition to branded wheels, there is no possibility of tuning. Technically implemented are two 160 and 225 horsepower engines with their own sounds and a pair of six-and eight-speed transmissions. The authors also prescribed their own physics, which brings the perception of control to realism.