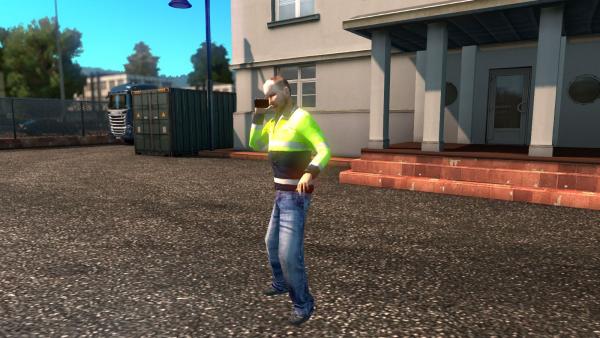 Lack of realism in the ETS 2 simulator? It's time to solve the problem! Thanks to the fresh mod, a real dispatcher will appear in the game project, who will monitor the current situation. Previously, we could only see green markers and other signs that showed the active zones of Euro Truck Simulator 2.

What will happen instead of markers and signs? There will be special staff. The characters are characterized by high-quality animation, for example, the car dealership manager has a rather serious and important look, the transport company dispatcher is talking on the phone, probably solving important problems, and the car mechanic is dancing while waiting for work. Characters are understood to mean operators, customs officers, persons in charge of warehouses and even a locksmith who conducts service stations! For virtual truckers, welcoming maximum realism in the game, you can advise in addition to install a mod of functioning gates and barriers, which will give even more realism to what is happening in the game world. The mod affects absolutely every base. Starting from gas stations, ending with points of maintenance, garages, customs points and so on.

Dear site user, whatever new mod you have installed in your game, do not forget to experience the quality of New trucks on the roads of the simulator ETS 2!
realism
Previous modNext mod

A small but very useful addition that gives more realism to the game world of the ETS 2 simulator. With its help, glowing animated markers are removed from active zones, and in some cases are...

It's time to diversify and improve the game world, adding a little more realism to it. As we know, the developers of the game did not realize the exit of smoke from the exhaust pipe. But thanks to...

A modification that adds more realism to the standard gameplay, namely new unloading places in transport companies, including hangars, warehouses and even sheds. Buildings, various objects and even...

The new modification allows you to add to the truck interior, both standard and added, a very useful useful accessory, GPS navigator Garmin 50LMT. Settings allow you to place the device in any part...

A very interesting mod to increase the realism of the game world. The addition adds the functioning of gates and barriers, when entering the territory of a transport company, car dealership, or...

The mod is designed to add maximum realism to the gameplay. After installing the add-on for a trucker, it will be much more difficult to complete tasks, since the employer will not provide new...