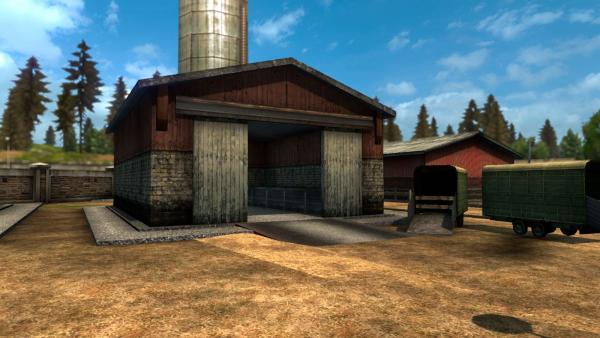 This mod will be a great addition for virtual drivers of the ETS 2 simulator respecting realism. The modification adds to the standard gameplay Euro Truck Simulator 2 new unloading places at the bases. The player will have to park the trailer at the final points in unusual, and sometimes even difficult places, among which there can be either ordinary warehouses or huge hangars, sheds and other places of unloading of goods. But besides everything, some obstacles, such as buildings, equipment and other objects, can block the way for a trucker to maneuver, which requires the driver maximum driving skills.

In order for the mod to function correctly, the following DLCs must be installed in the game: Scandinavia, Going East and Vive la France. But at the moment, unfortunately, the new parking spots for the trailer are not registered in all companies, however, the developer continues to refine the modification and plans to register unloading places in all companies.

Dear site user, whatever new mod you have installed in your game, do not forget to experience the quality of New trucks on the roads of the simulator ETS 2!
company realism
Previous modNext mod

Signs on Your Trailer

The Signs on Your Trailer mod implements in the ETS 2 simulator the ability to place a large number of various stickers and labels with alphabetic and graphic designations on your own trailer. Among...

The new Real Trailer Tires Mod adds to Euro Truck Simulator 2 the ability to install realistic tires of almost all sizes and types from reputable manufacturers on purchased trailers. All tires have a...

The Caravan Trailer mod implements in the game transport tasks for cargo transportation using cars on trailers of the Caravan type. These trailers are known to many players, as they are often found...

An unusual and interesting mod called Scania Truckskill Trailer implements in Euro Truck Simulator 2 one original trailer, a couple of container types and a set of genuine skins. The whole...