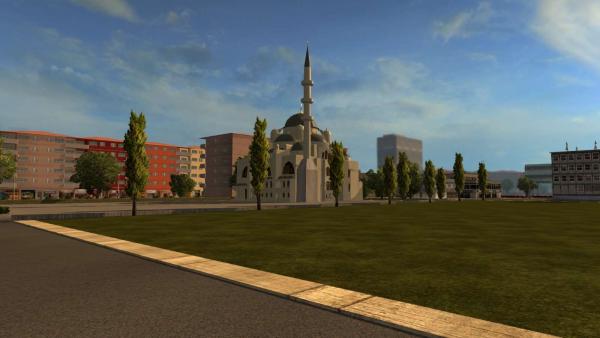 One of the largest projects for the implementation of the location of the territory of Turkey, a map with the original name Eu Turkey Map, from the author of YKS Team, was developed by the inhabitants of this exotic country. The developers tried to transfer to the game world all the charm and originality of the state. Virtual truckers of the ETS 2 simulator now have access to trucking even on Scania Concept on highways and roads in modern Turkish regions.

The YKS Team Turkey map mod for Euro Truck Simulator 2 includes more than seventy cities connected by a road network, of which three settlements are located in Georgia, two in Serbia, Croatia and some border states. New territories are qualitatively integrated into the standard game world, you can get to Turkish lands by a highway laid through Bulgaria or by taking the ferry.

The player is expected by new architectural objects, colorful buildings and structures, original signs, road signs, service points and gas stations. When creating the add-on, the developers took into account local features of the nature of the environment. When installing a modification, remember that for correct operation, DLC Going East and DLC Scandinavia are required.

Below is a list of the required installed DLCs for each version of the mod and simulator:

Dear user of the site, carrying out the transportation of goods across the expanses of Russian maps, to enhance the effect of realism, we recommend you to download and install the mod Russian radio stations for all versions of the simulator ETS 2!
new maps Turkey
Previous modNext mod