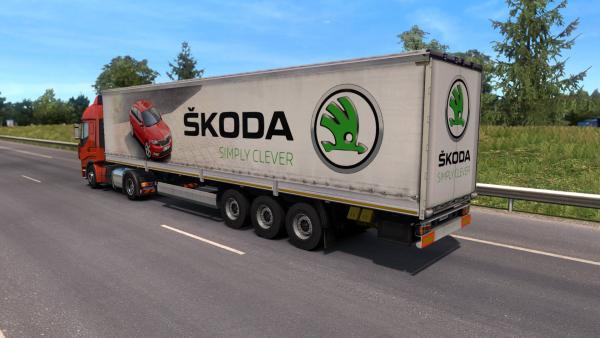 A new interesting mod that increases the realism in the game world of the ETS 2 simulator. After installing the add-on, trailers with branding and original colorings from well-known companies in all countries will begin to appear on the roads. The modification can be used both independently and in addition to already released mods, such as those that implement trailers of Russian companies, and the like. All trailer textures have a photorealistic structure and fit perfectly into the world of virtual European roads and third-party author's maps.

The mod of realistic trailers with SiSL's Trailer Pack brand logos for Euro Truck Simulator 2 has more than 700 new semi-trailers and has a large volume, but it does not load the game at all thanks to excellent optimization.

Dear site user, having installed suitable loads and trailers in the game, we recommend to download and install powerful trucks for your version of ETS simulator 2!
trailers semitrailers
Previous modNext mod

A new mod of animal trailers with the original name Animal trailer implements open passenger trailers in the game world of the ETS 2 simulator, with cows and horses of various colors placed on them....