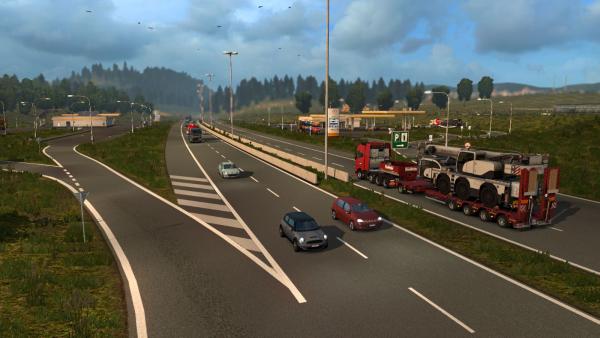 Modification that simulates the realistic behavior of drivers in the ETS 2 simulator adds more realism to the gameplay. The mod with the original name Alive Traffic divides drivers into several categories, based on the type of transport, driving skills and personal characteristics. Thus, on the roads of Euro Truck Simulator 2, the impression of movement of cars under the control of living people is created. This is especially noticeable with an increase in the number and variety of vehicles, for example by installing a pack of passenger traffic or some similar topic.

All categories of drivers are divided into groups, and their speed is not constant, but varies in certain figures depending on the circumstances, for example, drivers with an aggressive driving style drive at a speed of 100 - 160 km/h, and ordinary ones do not exceed the permissible speed mode starting from 70 km/h on regular roads, and ending at 95 km/h on motorways. In addition to them, there are those that are popularly called "teapots", their speed limit is from 45 to 65 km/h. Trucks move at a speed of 60 to 90 km/h, here it depends on the tractor power and the weight of the cargo carried. Well, the transport of special services, such as police cars, ambulances and fire brigades, depending on the task being performed, the speed varies from 60 to 120 km/h, and when special signals are turned on and flashing beacons are noticeably higher. Only bus drivers move with a certain permitted speed of not more than 70 km/h, since no one has canceled the responsibility for the lives of passengers.

After installing the mod, do not forget to give it the highest priority, that is, it should be at the very top of the list of installed mods!!!

Dear site user, whatever new mod you have installed in your game, do not forget to experience the quality of New trucks on the roads of the simulator ETS 2!
traffic realism
Previous modNext mod

New drivers in trendy, colorful clothes with stylish tattoos will add variety to the game. There are three truckers to choose from for every taste. The models have full animation and high-quality...