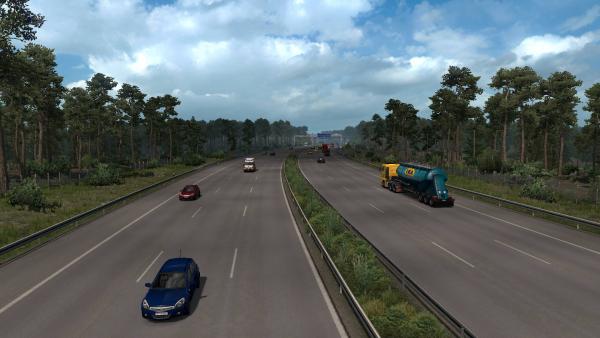 Mod under the original name Real Traffic Density and Ratio implements in the simulator ETS 2 realistic traffic density. After its installation, the frequency of different types of transport will change, taking into account the terrain and time of day. Modification, as well as live traffic, will significantly increase realism on the roads of the game world Euro Truck Simulator 2.

Among the features of the mod, it is possible to note the density of traffic flow depending on the morning, afternoon, evening and night hours, that is, the amount of transport increases during peak hours, and at night it decreases markedly. Categories of vehicles are distributed according to the territory, in cities and other settlements cars and buses prevail, and on highways and country roads there are more trucks.

Dear site user, whatever new mod you have installed in your game, do not forget to experience the quality of New trucks on the roads of the simulator ETS 2!
traffic realism
Previous modNext mod

The Alive Traffic add-on adds more realism to the game. Now, the behavior of drivers is becoming more diverse, inexperienced people move at a low speed at the far right lane, majors in sports cars...