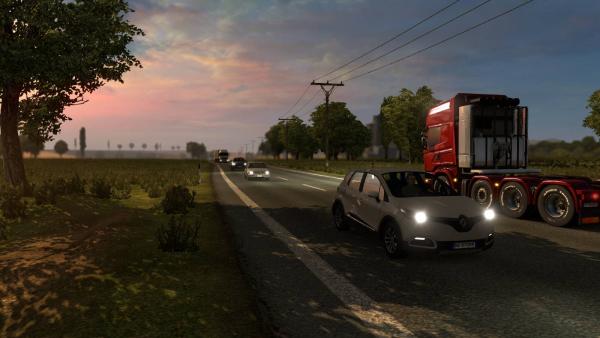 Supplement for true professionals. Mod AI Traffic Pack includes a whole package of updates for cars. If you are used to seeing only inconspicuous monotonous cars on your way in ETS 2 that you don’t pay any attention to, then after installing the add-on through the windshield you will see a lot of vehicles from famous foreign brands. The supplement was based on brands from around the world, including the most recognizable cars, even luxury ones, such as the Mercedes-Benz G65.

The modification included both real legends of the foreign automobile industry (cars manufactured 20 years ago) and relatively fresh models. But the age of the models is not as important as their qualitative detailing. The game prototype is 99% similar to the real appearance of vehicles, so it’s simply impossible not to recognize cars known around the world. It's time to diversify the standard and boring traffic of Euro Truck Simulator 2 cars with great cars!

Starting with version 10.7, trailers for cars and police cars for 11 countries have been added. In the latest version, mod 14.8.2 for ETS2 1.37 - 1.40 there were new popular models of passenger cars, as a result, their number increased to 467 pieces, and the number of skins exceeded 600.

Dear user of the site, choosing your favorite number and variety of vehicles on the road, we recommend you to download and install additional map for your version of the simulator ETS 2!
traffic cars pack
Next mod