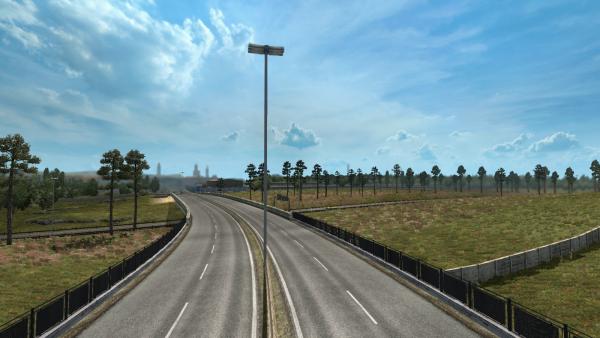 Not so long ago, we already transferred a piece of American Truck Simulator to ETS 2, by adding the original ATS traffic. Now we have the opportunity to add the atmospheric character of the simulator of American truckers. The weather mod from ATS for Euro Truck Simulator 2 dramatically changes the weather conditions of the original game, to new ones, which feature characteristic weather effects.

The authors tried to convey in detail not only the climate of the North American continent, but also supplemented the modification with color balance settings from the popular creator of graphical add-ons SGate, which, in turn, are widely known for maximum realism. The mod is universal, as it works not only with standard locations of European roads, but also with maps from third-party developers. You need to know that for the SGate’s ATS Weather to work correctly, the file should be given the highest priority, that is, placed at the very top of the file list.

Dear site user, whatever new mod you have installed in your game, do not forget to experience the quality of New trucks on the roads of the simulator ETS 2!
weather graphics
Previous modNext mod

Seasonal mod that changes the standard summer time of the year to a frosty winter season. The author of the project managed to completely replace almost all the textures of roads, curbs, sidewalks,...

Each player of Euro Truck Simulator 2 wants to see the maximum realism of the game world, so many authors create a large number of graphic mods. One of these modifications is Lautus Graphics &...