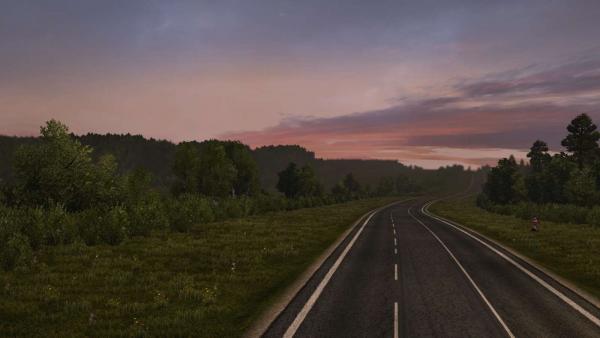 Each player of the ETS simulator spends quite a long time behind the wheel of his heavy truck, and naturally, in addition to interesting routes and a high-quality truck, he wants to admire the beauties of the surrounding landscapes from the car window. It is much more pleasant for long, and sometimes difficult trips, to observe realistic weather effects, as close as possible to real conditions.

The graphic mod Lautus Graphics & Weather HD for Euro Truck Simulator 2 globally changes the visualization of the game world. In the modification, the authors realized more than ninety variants of the color scheme of the heavenly vault, which is often the appearance of the same sky is minimized. Weather conditions have also undergone changes, now in the morning hours you can observe fog of various densities. The developers of the add-on added fifteen options for dawn and the same amount of weather effects. Processing affected not only the daytime, but also the night, the dark time began to look even more like natural, in addition to this correction, the headlights in the stream of transport underwent. Virtual truckers will appreciate the innovations, because the mod is universal, as it works on third-party maps, for example, when using Eastern Express, the modification will show itself in all its glory, since the frequent weather changes in central Russia are very characteristic.

Dear site user, whatever new mod you have installed in your game, do not forget to experience the quality of New trucks on the roads of the simulator ETS 2!
weather graphics realism
Previous modNext mod

The American trucker simulator is very similar to our favorite ETS 2 game, the difference is the individuality of the geographical location of the North American country, a kind of traffic,...