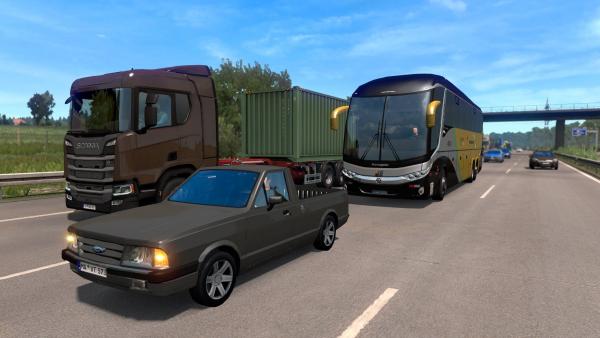 Agree, because fans of additional locations implemented by the authors of additions to the ETS 2 simulator would like new territories to be as close to realistic as possible. Such updates that add realism include traffic mods.

Brazilian traffic mod - Brazilian Traffic Pack for Euro Truck Simulator 2 is mainly intended for maps of Brazil, however, due to its uniqueness, it is fully functional not only on standard locations, but also when using additional maps. After installing it in the game, fans of the ETS 2 simulator on the roads will find a new transport that is more suitable for Latin America, including buses: Irizar PB, Comil Campione with original skins, trucks: Volkswagen Constellation, Ford Cargo, cars: Renault Kangoo Toyota Hilux, and many other similar vehicles.

For the mod to work only on Brazil maps, in the folder with the mod you need to unzip and activate 2 files:

If you want to see Brazilian transport on all maps, you need to unzip and activate 1 file in the folder:

Dear user of the site, choosing your favorite number and variety of vehicles on the road, we recommend you to download and install additional map for your version of the simulator ETS 2!
traffic pack Brazil
Previous modNext mod

An excellent modification, first of all, is perfect for revitalizing additional maps with a Russian location. The mod contains just a huge amount of domestic transport, prescribed in the traffic. In...