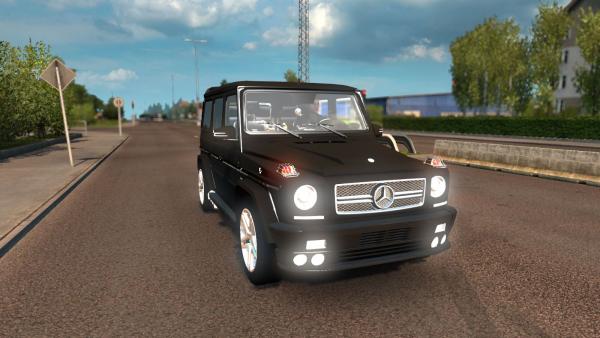 Favorite car of representatives of the so-called golden youth, frame SUV Gelandewagen, produced by the German automobile concern Mercedes-Benz. The first copies of the SUV came off the assembly line in the early seventies of the last century and were intended mainly for the needs of the army. Although the car is being modernized all the time, engineers are in no hurry to change the typical angular appearance of the body, leaving recognizable all over the world, the characteristic features of a representative elite premium Mercedes SUV.

The Mercedes-Benz G65 AMG mod is presented to our attention, the authors of the add-on for Euro Truck Simulator 2 put a lot of effort and time into its creation, as a result, Gelandewagen turned out to be quite high-quality and will worthily take its place in the collection of elite cars along with the BMW i8. In the car dealership, the virtual driver will be asked to choose his own, individual vehicle equipment. Of the power units, there are two engines and four gearboxes. To create an individual look, there are eight bumpers, of which five rear and three front, wheels and tires and spoilers in the amount of three pieces, as well as three types of taillights. It is possible to install steps, exhaust pipes and remove the spare tire from the rear door. I would especially like to note the well-designed original car interior. Modification supports the latest available DLCs. Fans of the ETS 2 simulator will enjoy a lot of positive emotions and an unforgettable experience driving a luxury car.

A classic passenger car that has become a legend, a Mercedes-Benz 190E, made in Germany with two types of suspensions, a gasoline and diesel engine, original rims with tires, as well as the ability...