What is password for extracting the file in winrar Can tell pls...
WE IN VK
SUBSCRIBE
Mods for ETS 2 simulator / Trailers / Pak trailers RC.Team 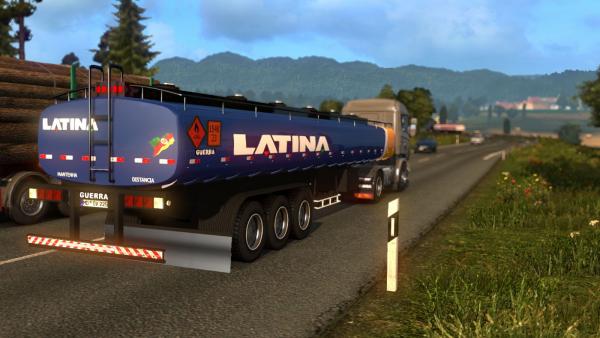 Did you miss the cool semi-trailers in ETS 2? It's time to get acquainted with the work from the not-so-well-known RC.Team developers. The trailers were based on platforms such as Fuel Cistern and Thermos. In total, you get a package of fifty skins. And most importantly, according to the developers, this is only a trial version of the modification, an update will be released in the near future, in which there will be even more trailers.

The mod has excellent detail, absolute independence, the original wheels are included in the gift, and most importantly, absolutely all trailers will automatically go into traffic, and does not conflict with such modifications like trailers with military equipment. And also support for all the latest Euro Truck Simulator 2 features is guaranteed. Even the lifting axle and the advanced hitch are supported!

Dear site user, having installed suitable loads and trailers in the game, we recommend to download and install powerful trucks for your version of ETS simulator 2!
trailers semi-trailers platforms traffic
Next mod

First of all, a pack of trailers with military equipment will be interesting to fans of army subjects. If desired, the player can register them not only in the orders of agencies, but also in...