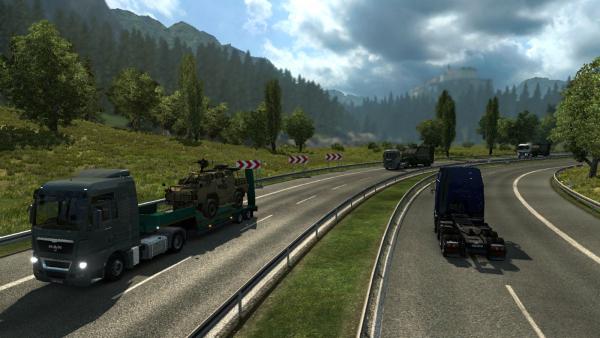 This pack is intended both for fans of military equipment, and for fans of the diversity of the game world. In the mod of semi-trailers - platforms with army equipment for Euro Truck Simulator 2, there are 202 new high-quality models of trailers that are loaded with military equipment of Russian and other production, these are guns, armored personnel carriers, tanks, helicopters and much more, up to army boats , which can be transported not only using standard tractors, but also using the Hemmit army truck.

Due to the peculiarity of the cargo, the author did not register the trailers in the traffic, but posted a fix in the archive, after connecting which the platforms with military cargo will appear in the traffic. All semitrailers are fully operational and compatible with any mods and maps for ETS 2.

If you have installed the Russian version of the game, then you should use the file:

If you want to add trailer traffic to the game, then additionally set a fix:

And of course, don't forget аbout:

Dear site user, having installed suitable loads and trailers in the game, we recommend to download and install powerful trucks for your version of ETS simulator 2!
trailers traffic semi-trailers platforms
Previous modNext mod

The mod of railway cargo will add to the world of Euro Truck Simulator 2 more variety and interest in the gameplay. With its help, new trailers with loads will appear, and of course, additional tasks...