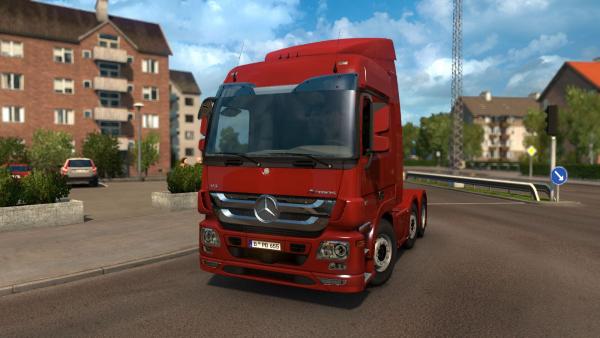 It's no secret that the standard tractors in Euro Truck Simulator 2 do not differ in the abundance of components for tuning. Thanks to the enthusiasm of fans of the ETS 2 simulator, these gaps can be filled. The authors of the modifications put a lot of effort and patience into improving the default trucks, so that virtual truckers would be more interesting to play their favorite game, the standard of the creators of large modifications is Ohaha, who created a large-scale tuning mod Volvo FH16 2009. But there are other, equally capable masters of their craft .

A new mod that increases the ability to customize a typical Mercedes-Benz Actros MP3 truck adds a ton of opportunities, because the set has a lot of elements for decorating the body of a Mercedes truck, firstly, many parts have a chrome finish, instead of the usual painted ones, which will add brightness and originality to the car ; secondly, there is the possibility of a wide selection of replacement components such as grilles, fuel tanks, badges with logos, exhaust pipes, bumpers and much more. Alterations touched and the chassis, there were three new chassis options with an understated base. And that's not all, we offer each player to decorate their steel friend on their own and sweep along the endless roads of Europe and their favorite author’s locations.

If you are a fan of the standard truck Volvo FH 2012, then the modification is specially for you. Indeed, a new set of spare parts will significantly improve the appearance of your steel friend. In...

Tired of a meager standard set of spare parts and tuning? Then, specially for you, the famous Ohaha modmaker developed a new addition for the default truck Volvo FH16 2009. With it, any player will...