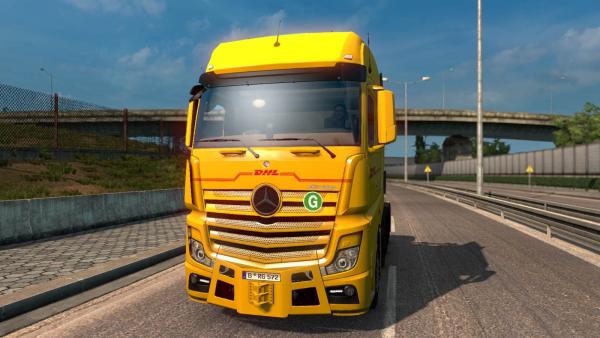 Fans of the ETS 2 simulator probably once faced with limited tuning capabilities of their steel horses due to the small number of available spare parts sold by the developers of the game. Fortunately, authors of modifications regularly release mods that increase the number of additional accessories to improve the appearance of trucks, such as, for example, Iveco Stralis pumped from developers AlexeyP, Snoman, Kriechbaum, Piva.

The tuning mode of the standard Mercedes-Benz Actros MP4 tractor unit for Euro Truck Simulator 2 adds additional details to the Mercedes garages of the ETS 2 simulator, such as mirrors, spoilers, grilles and other elements coated with chrome, made of plastic or okr. In addition, the player will be available new engines, cabs, frames and chassis, including type BDF with the ability to install a booth, container or body.

With the new mod that improves the standard Iveco Stralis tractor, we get a truck radically changed for the better. Transformations affected textures, sound, a large number of engines of various...

The addition allows fans of the standard Mercedes-Benz Actros MP3 tractor to give an exclusive look, decorating it to your liking. Chrome parts appeared in the kit, which in the usual version were...