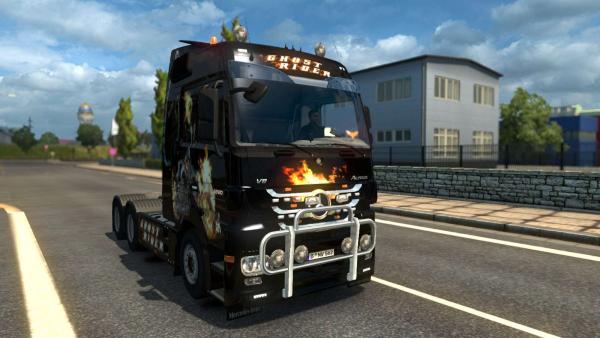 The modified and augmented Mercedes-Benz Actros MP3 tractor from the standard truck set of the ETS 2 simulator adds more variety to the gameplay. The developer of the modification significantly increased the number of replaced elements, so their number increased from 19 to 32.

The mod of the Mercedes-Benz Actros MP3 truck for Euro Truck Simulator 2 by Schumi has in its arsenal several new chassis, including an 8x4 wheelbase, an additional cab and a redesigned interior, and each of the nine engines has its own decals.

A tow truck with a crane based on the Mercedes-Benz Actros MP4 tractor is designed on a chassis with an 8x4 wheel arrangement and is registered in the game as a separate slot. From power units to the...

It's time to breathe a little freshness and novelty into the standard Renault Premium tractor, this will help us a new mod from the popular author Schumi. Thanks to his efforts, the noticeably...