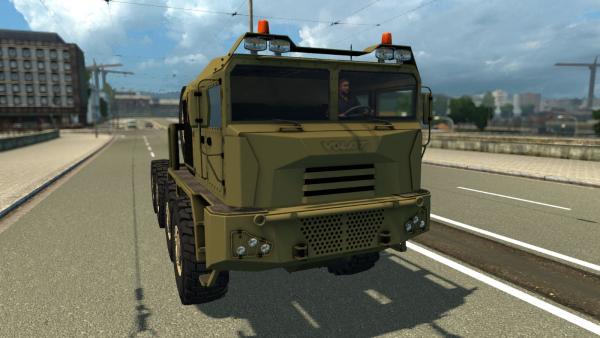 The mod of the four-axle VOLAT MZKT-742910 tractor with all-wheel drive from Belarusian manufacturers allows you to take a fresh look at the ETS 2 simulator. The truck is designed to carry bulky goods weighing up to 150 tons. The new machine will make it easy to overcome difficult roads and routes, such as the Severe Russia Baikal maps. She will submit to any off-road, engine power and patency of an army tractor will cope with any difficulties of the way.

The authors of the modification implemented a choice of sixteen types of engines from 240 to 440 horsepower, the gearbox has 8 speeds, an assortment of seven types of off-road wheels will complement the power of the truck. The powerful super truck mod for Euro Truck Simulator 2 has support for DLC Cabin Accessories and National Flag. The interior of the cabin is almost exactly the same as the real prototype, and the instruments placed on the panel have a working animation.

Dear user of the site, traveling on the roads on the domestic truck, to feel like a real Russian trucker, we recommend you to download and install the mod Russian radio stations for any version of ETS 2 simulator!
VOLAT truck tractor MZKT
Previous modNext mod

The powerful Hemmit military tractor on a chassis with an 8x8 wheel arrangement has a choice of three types of engines for 500, 700 and 750 horsepower, in addition there is the possibility of several...

The powerful MAN TGA truck tractor is represented by a high-quality model with a well-designed interior of the driver's cabin. Choosing from a wide range of cabs, chassis, engines and gearboxes will...