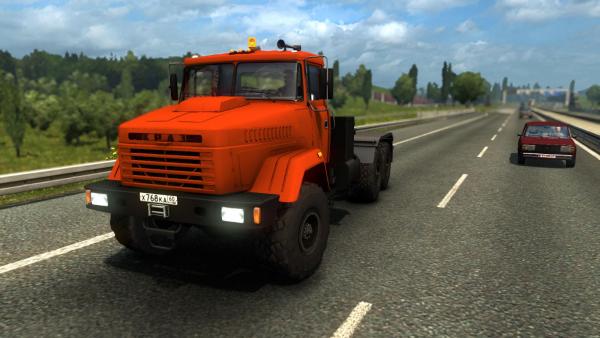 The prototypes of the powerful KrAZ-64431 main tractor and the KrAZ-6443 off-road variant were produced at the Kremenchug Automobile Plant in 1987, however, due to the difficult political and economic situation in the country, they went into mass production only in 1993. According to the owners, the cars are not very reliable, but the low price, technical specifications and high load capacity allowed the trucks to become widespread. The maximum permissible load allows you to transport trailers with a total cargo weight of up to 59 tons, which makes it possible to use it for the transportation of oversized cargo, and over-passability will help to overcome the impassability of the author’s location of the Stern Russia Baikal map.

The KrAZ-64431 and KrAZ-6443 truck mods for Euro Truck Simulator 2 have a chassis with 6x4 and 6x6 wheel formulas for the off-road version. When upgrading or buying a virtual trucker, cabs of the usual type and with a driver's berth are available, several engines and transmissions are additionally available. The cabin has its own, original high-quality interior, to which the authors of the supplement paid a lot of attention to give a realistic game scene. Additional elements and parts that are included in the kit to give individuality are not typical for the ETS 2 simulator, in addition to various additional spare parts, you can choose instances of windshields, among which are dirty, with stains from wipers, or even half broken, which complements the effect of the realism of the game world.

VOLAT MZKT-742910 - a powerful truck from the Belarusian automobile industry. Designed to work in difficult climatic conditions, off-road and transportation of heavy bulky goods. In mod, the authors...