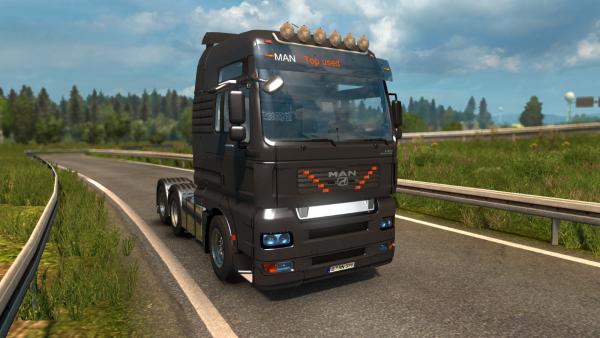 The MAN TGA tractor unit began to count its history from the first days of the new millennium, when the production of this series was launched, and the last instance of the machine came off the assembly line in 2007. The carrying capacity is more than 18 tons, in connection with which the MAN truck has gained immense popularity among companies involved in the transportation of large-capacity special cargoes. In the ETS 2 simulator, the tractor will also cope with the transportation of oversized cargo, thanks to its maneuverability.

The powerful MAN TGA 18.430 truck for Euro Truck Simulator 2 is presented with five types of 4x2, 6x2 and 6x4 wheel chassis on which you can install the selected cab, presented in two types of execution. Four powerful engines and two gearboxes allow the coachman to cope with any road and weather difficulties. The virtual trucker will especially appreciate the carefully designed interior of the cabin with an original instrument panel and its own animation. The creator of the mod added sleeping accessories to the sleeping bag, where the driver can sleep plenty during long trips. Well, this cargo masterpiece completes, a characteristic set of sounds, branded wheels with tires and a small, but impressive, set for external tuning.

The heavy truck MAN F2000 began to count its history from the beginning of the nineties of the last century. A very popular car has earned respect and respect for its reliability and safety. In our...