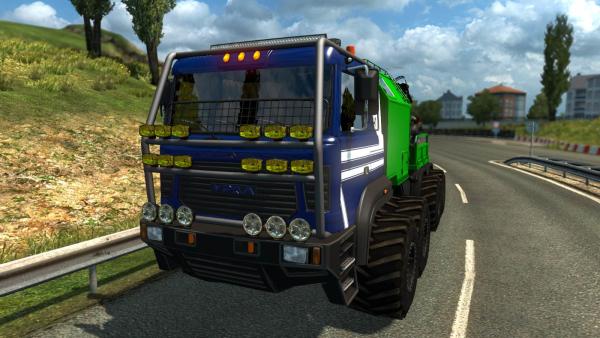 Exploring previously unexplored regions of Russia, many companies engaged in geological exploration, faced with the problem of lack of transport to conquer impassable areas. Therefore, the Gazprom corporation, at the Ural-Nosta association, was forced to order a heavy truck tractor on an all-terrain chassis, capable of transporting heavy trailers in difficult road conditions and replacing the Belarusian MZKT. Through many design decisions, the company's engineers created a completely new tractor, the Ural Taganai, which is adapted to the harsh working conditions in the Far North and towing semi-trailers weighing up to ninety tons.

The Ural Taganai heavy truck tractor mod for Euro Truck Simulator 2 has five types of chassis with 4x4, 6x6 and 8x8 wheel formulas, six engines from 300 to 950 horsepower and as many as nine gearboxes at 8, 9, 12, 14 and 16 speeds. A virtual trucker can choose the appropriate equipment for himself in the car showroom of the ETS 2 simulator upon purchase, or subsequent modernization in the garage. Of course, to conquer the off-road map of Severe Russia, the player should choose the most powerful version of the truck. In addition, the player is available several types of off-road wheels on the original wheels, as well as a rich assortment of tuning items. The authors of the modification implemented the characteristic physics of the behavior of the car; added a set of genuine sounds and several branded skins, including camouflage coloring of the cabin. Particularly noteworthy is the carefully worked out and to the smallest detail recreated unique interior of the cabin with working animation of the instruments.

Dear user of the site, traveling on the roads on the domestic truck, to feel like a real Russian trucker, we recommend you to download and install the mod Russian radio stations for any version of ETS 2 simulator!
Ural truck
Previous modNext mod