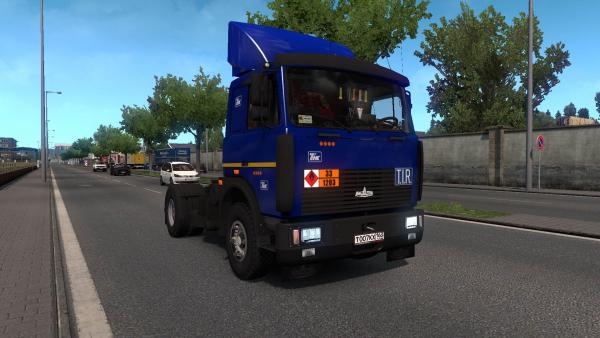 With the legendary representatives of the Minsk Automobile Plant, MAZ 5432 and 6422 trucks, the players of the ETS 2 simulator were already lucky to meet, thanks to the efforts of the authors of the modifications. These cars do not need to be introduced, because many instances of cars are found every day on the roads of our vast Motherland. And then, finally, another qualitative addition came out that implemented eminent trucks from Belarus in the game.

The MAZ 54323-08 and 6422 truck mod based on the Euro Truck Simulator 2 tractor unit exactly repeats the features of real prototypes, a high-quality three-dimensional model has full detail, and to give maximum similarity, the developers used high-resolution textures. When buying a truck, a virtual trucker can get a pair of chassis with 4x2 and 6x4 wheel formulas, the same number of engines with 330 and 425 horsepower with their own set of sounds, five gearboxes at 8, 10, 14 and 16 speeds, and one cabin with driver’s berth, with a carefully designed interior, implemented animation and the ability to install original accessories in the cabin.

In addition, the mod is equipped with a MAZ-9758 trailer, which will fit perfectly into the gameplay and give greater realism to the virtual world of long roads.

Dear user of the site, traveling on the roads on the domestic truck, to feel like a real Russian trucker, we recommend you to download and install the mod Russian radio stations for any version of ETS 2 simulator!
MAZ truck tractor
Previous modNext mod

The game world of Euro Truck Simulator 2 is finally replenished with another rare Renault 1975 Saviem truck, made in high quality. The truck mod includes an original cabin with six skins and an...

Finally, in the simulator ETS 2 there was a new author's addition, the next version of the passenger car of the popular BMW brand-BMW 5-Series E34. Passenger car recreated using high-quality...

The MAZ-9758 three-axle semi-trailer is produced in several types of modifications, from the refrigerator to the platform, with a payload capacity of up to 26 tons. The trailer is fully adapted to...