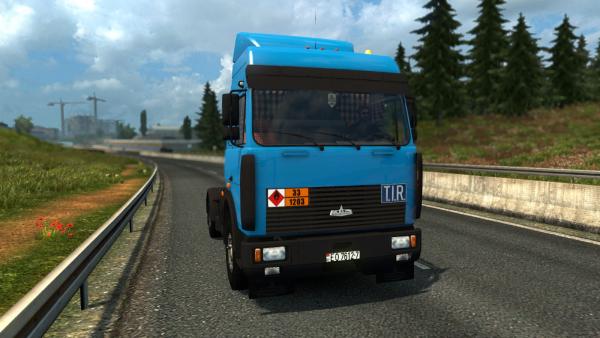 The Soviet MAZ-6422 and MAZ-5432 tractor units began their history from the seventies of the last century, when their mass production began at the Minsk Automobile Plant. Trucks gained wide popularity among Russian drivers, since the level of comfort of the cabin was by the standards of that time at the highest level. As they were produced, the cars went through several modernizations and still go off the assembly line of the automobile plant in the capital of Belarus.

The MAZ-6422 and MAZ-5432 truck mod for Euro Truck Simulator 2 is made in excellent quality and reflect a maximum of realism, thanks to the realistic textures and original engineering drawings used by the authors to create the modification. The truck will be of interest first of all to lovers of Russian locations of the ETS 2 simulator, the Russian map - RusMap can look especially colorful since, in addition to the regions of Russia, roads and the cities of Belarus, the homeland of the truck, are registered in it.

Well, back to our car, the trucker will have to choose a cab from the available low or high options, install a spoiler on the roof, more than ten engines of domestic production with power from 180 to 330 horsepower, and even a 730 horsepower foreign engine from MAN. The driver will like the original interior of the cabin, the characteristic soundtrack of the truck and a genuine functioning dashboard.