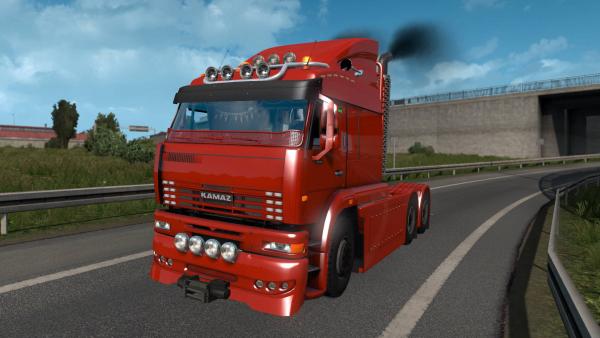 Mods Russian trucks are incredibly popular among fans of the simulator ETS 2. This is especially noticeable in the abundance of author's modifications of domestic KamAZ trucks. For example, the KamAZ-6460 tractor is present in several variations, and now, the developers of the additions have developed a new version of the car, which will appeal to fans of non-standard cars.

Mod truck KamAZ-6460 Turbo Diesel for Euro Truck Simulator 2 has an unusual appearance, more reminiscent of an exclusive car. There is a single elongated cabin with its own interior, which can be painted in any color, including the type of metallic, powerful and fast engine, several chassis, and even with all-wheel drive and wheel formula 6x6. The abundance of accessories for outdoor tuning will amaze even the most sophisticated player, in addition, prescribed smooth running properties, added a set of original sound and animation of smoke from high exhaust pipes.

Russian trucks KamAZ 5360, 5480 and 6460-73 will create a new gaming atmosphere with their appearance and color. High quality performance of the body and interior of the driver’s cabin will delight...