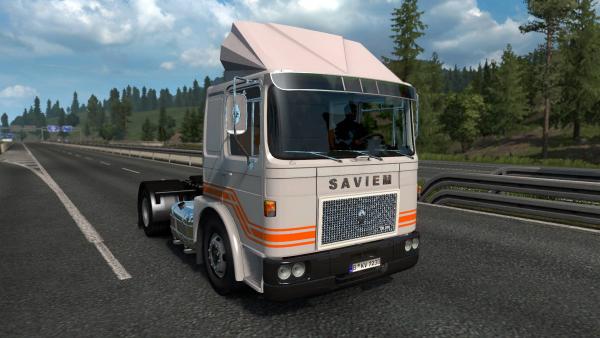 The history of the Saviem truck plant dates back several decades, and dates back to the end of December 1955. The company was engaged in the assembly of trucks, buses and special equipment based on Renault under its own brand. The company’s era ended in 1978, when, by decision of the French president, the company became part of the Renault RVI subsidiary. At the moment, trucks manufactured at the Saviem factory are almost impossible to meet on the world's roads, however, thanks to the efforts of the authors of the modifications, the players of the ETS 2 simulator have the opportunity to experience the full potential of this iron retro monster.

The Renault 1975 Saviem truck mod for Euro Truck Simulator 2 will be a great addition to the collection of vintage trucks such as the Ford F-14000 and the like. The authors of the modification have for sure recreated a cabin with an original interior with full animation and the ability to install a Serioux UPQ 500 GPS navigator. For the ETS 2 sim player, a choice of a pair of chassis with 4x2 and 6x4 wheel formulas, three engines with a capacity of 565, 285 and 305 horsepower with its own set of sounds and physics, and the same number of gearboxes at 5, 6 and 12 speeds. The virtual trucker has the option of painting the cab in any color, including metallic type, as well as choosing one of six skins or color schemes for coloring. In addition, there is a set of spare parts for tuning, which includes a visor above the windshield, several types of mirrors, bumpers, steps, fenders, door handles and a spoiler.

Dear user of the site, traveling on the roads in a truck that would feel like a real trucker, we recommend you to download and install the mod autor's maps for any version of the simulator ETS 2!
truck Renault

Rare lorries tightly entered the life of every virtual driver, because this is an opportunity to plunge into the not very distant past, when copies of such cars plowed the vast expanses of many...

The mod of powerful trucks Iveco Trakke includes almost the entire series of large-capacity trucks, which can be used as a tractor for carrying heavy cargo. A dozen heavy-duty engines paired with an...