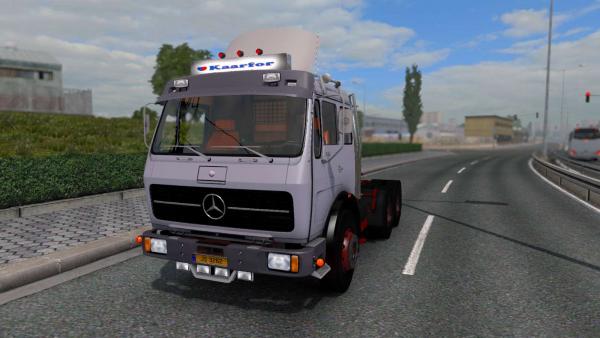 The German truck Mercedes-Benz NG1632 in the late seventies and early eighties of the last century was one of the most common trucks not only in the GDR and Germany, but also in many other countries of eastern and western Europe. Thanks to perfect technology and advanced engineering, the car has gained great popularity in various areas of transport companies.

The mod of the truck Mercedes-Benz NG1632 for Euro Truck Simulator 2 is built on the chassis of a truck tractor on bases with wheel formulas 4x2, 6x4 and 6x6. The authors recreated the appearance of a vintage truck with thorough accuracy, which puts it on a par with many other author-owned trucks of eminent developers. First of all, Mercedes will be of interest to fans of the western automobile industry of the last century, since in addition to a peculiar appearance, the modification contains several original skins that can be easily installed in any workshop of the ETS 2 simulator.

Dear user of the site, carrying out the transportation of goods on the virtual roads of Europe, for a variety of gameplay, do not forget to download and install new maps for any version of the simulator ETS 2!
Mercedes-Benz truck
Previous modNext mod