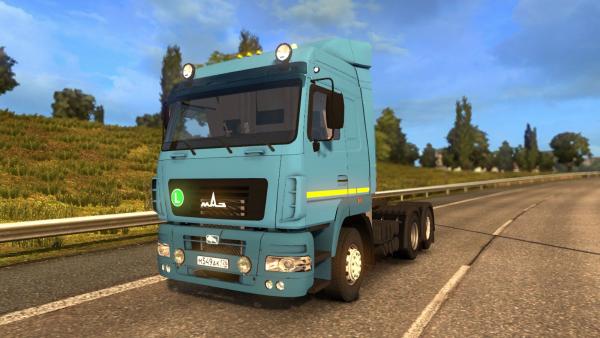 The production of MAZ-5440 truck tractors started at the Minsk Automobile Plant in 1997, since then twenty years have passed, but due to the high popularity of the truck, with minor modifications, the car is still off the assembly line. The truck engine complies with environmental safety standards, so the truck confidently holds a fairly competitive bar and is in demand in Eastern Europe. In our case, in addition to the European virtual roads of the ETS 2 simulator, our brand new MAZ, using the Russian map, can be seen on the highways of Russia and Belarus.

The Minsk trucks MAZ-5440A9 and MAZ-6430A9 mod for Euro Truck Simulator 2 are built on a chassis with 4x2 and 6x4 wheel formulas, which you can choose when buying. The range of power units includes four engines with a capacity of 540 to 750 horsepower and two gearboxes. And of course, a virtual trucker will be pleased with a set of external original tuning, among which you can find characteristic stickers. Let us not ignore the interior of the cabin, visually it exactly repeats the real cabin of a real Russian driver, on the panel you can see glued icons, a walkie-talkie under the ceiling, a video recorder and many other classic attributes.

The game version of the Soviet MAZ-500 truck is a model for modular design, a wide selection of power units and chassis has been prepared for players, and a wide range of accessories for the...

The MAZ 5440E9 truck is presented in the form of several configuration options, including two cabs, the same number of chassis types, and there is a choice of the most suitable bumper for your taste....