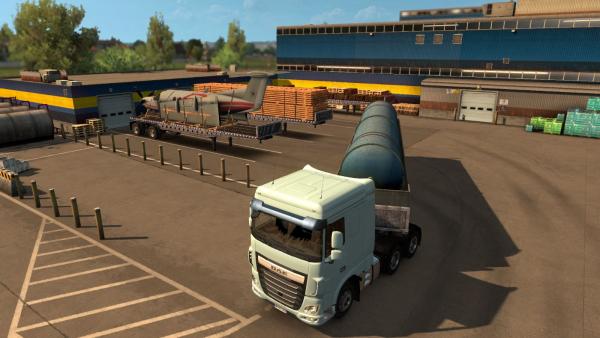 The ETS 2 game was originally developed as a simulator of a trucker driver transporting all kinds of trucks, but over time, many players accumulate considerable experience, and transportation of ordinary cargo becomes not interesting. Then the author’s modifications of new trailers come to the rescue, for example, a pack of tanks allows the virtual trucker to feel himself in the new role of a carrier of flammable liquids or milk, the quality of the product depends on the speed of delivery.

This mod of oversized cargo pack for Euro Truck Simulator 2 contains specialized semi-axle semi-trailers with cargoes of various weights, varying from 18 to 80 tons. In the tasks, the driver will be entrusted with the delivery of the railway locomotive, wagon, airliner elements, massive metal structures and much more. Large dimensions and mass make it much more difficult not only to reach the destination, but even to leave the transport company. The player will have to concentrate as much as possible on his driving and maneuvering skills, in order to deliver the oversized cargo to its destination on time and without damage. The supplement does not conflict with such modifications, and trailers are also registered in traffic, so they will appear on the expanses of endless roads.