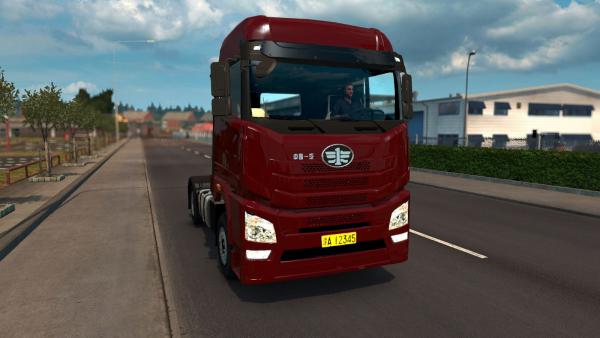 Chinese heavy truck FAW JH6, which has increased comfort, is presented in the ETS 2 simulator as a trial version, since work on it is still being carried out by developers. At the moment, the truck is not registered as a separate slot, and is not autonomous in the game, but replaces the standard Mercedes Actros 2014. But to this day we still have a fully functional version, which can be easily verified.

The cabin interior and the dashboard of the tractor are carefully designed, it is possible to adjust the position of the steering wheel. With the choice of equipment so far not a lot, the only option is offered, with an engine with 420 horsepower, a 6x4 chassis base and a twelve-speed gearbox. On the example of the mod of this truck in Euro Truck Simulator 2, an opportunity is given to trace the enormous growth of engineering ideas of manufacturers from the Middle Kingdom, from the FAW CA-10 copied back in the fifties to this powerful huge handsome man.

Dear user of the site, carrying out the transportation of goods on the virtual roads of Europe, for a variety of gameplay, do not forget to download and install new maps for any version of the simulator ETS 2!
FAW truck tractor
Previous modNext mod

A tow truck with a crane based on the Mercedes-Benz Actros MP4 tractor is designed on a chassis with an 8x4 wheel arrangement and is registered in the game as a separate slot. From power units to the...

Familiar to every lover of the ETS 2 simulator, the Iveco Stralis main tractor is presented in the author's version, and is registered in a separate slot. In technical terms, the new truck is...