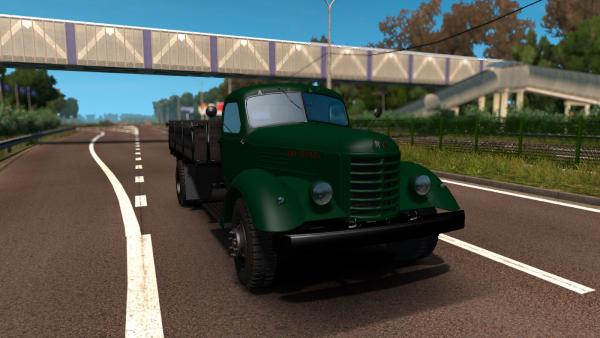 Chinese truck FAW Jiefang CA-10 with a carrying capacity of 4 tons and a speed of 65 km / h, produced since the fifties of the last century for the needs of the country's army. The truck has a perfect resemblance to the Soviet ZiS-150, which was a prototype.

In the ETS 2 simulator, the car is presented in high quality. The new tractor will be a pleasant addition to the game, along with such machines as the ZIL-130 or ZIL-131, because the FAV truck mod is carefully designed, has its own interior, animation of the dashboard arrows, working wipers, levers, four engines with power from 125 to 170 horsepower forces and three gearboxes. In addition, fans of Euro Truck Simulator 2 will be pleasantly surprised by the original tires with tires and new sounds.

Dear user of the site, carrying out the transportation of goods on the virtual roads of Europe, for a variety of gameplay, do not forget to download and install new maps for any version of the simulator ETS 2!
FAW truck tractor
Previous modNext mod

High-performance powerful passenger car BMW M5 E60 from Bavaria with a well-executed body model and a well-designed interior. It has its own instrument animation, original wheels with branded tires,...