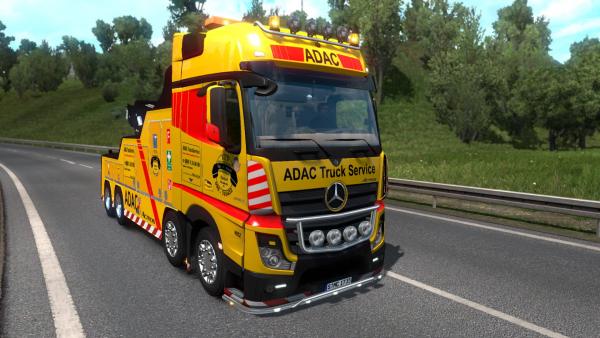 The tow truck based on the Mercedes-Benz Actros MP4 truck is equipped with a special crane and a towing device for transporting by partial loading heavy vehicles, such as buses, trucks, tractors and similar specific loads.

The mod of the tow truck with a Mercedes-Benz Actros MP4 crane for Euro Truck Simulator 2 is similar in functionality to the Scania Streamline, has a separate slot, and is available for purchase at Mercedes dealerships located throughout the huge ETS 2 sim map. The truck is designed on a chassis with a wheeled the formula is 8x4, the player is given the choice of six engines with power from 421 to 625 horsepower with a set of original soundtrack, and a pair of gearboxes at 12 speeds. Features add signature wheels and a bright skin.

In version 1.4 for ETS 2 1.35, additional skins are already added to the archive - ADAC for CraneTruck and your own cargo pack. The order of connecting mods, see additional screenshots!

In order to fully use the new transport, you need to download and install the pack of vehicles for towing into the game:

Dear user of the site, carrying out the transportation of goods on the virtual roads of Europe, for a variety of gameplay, do not forget to download and install new maps for any version of the simulator ETS 2!
tow truck Mercedes-Benz
Previous modNext mod