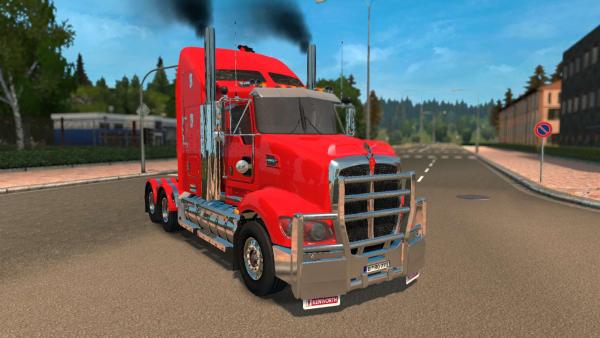 In the modern realities of heavy automotive industry, along with the power and reliability of power units, much attention is given to the comfort of work and leisure of a trucker, directly during the implementation of long-distance transportation. One such example is the American-made Kenworth T609 main tractor, which easily overcomes long distances, even as part of a road train, which makes a huge difference from the Kenworth T800 produced by the same company.

The mod of the truck Kenworth T609 for Euro Truck Simulator 2 with exact accuracy repeats all the features of a real brother. The modification includes a pair of cabs built on a chassis with a 6? 4 wheel arrangement, over thirty engines with a set of their own soundtrack and physics of behavior. ETS 2 simulator fans will be pleasantly surprised by six gearboxes from 10 to 18 speeds. A virtual driver in any of the garages will be able to give his steel horse individuality from a rich set of tuning parts to his taste. The interior of the truck was made in high quality, the developers of the add-on embodied in the game version the steering wheel adjustment, animation of the dashboard and support for DLC Cabin Accessories. Of particular note is the implementation of exhaust smoke from pipes.

Dear user of the site, carrying out the transportation of goods on the virtual roads of Europe, for a variety of gameplay, do not forget to download and install new maps for any version of the simulator ETS 2!
Kenworth truck
Previous modNext mod

Kenworth T800 trucks shining with chrome have plowed the globe for many years. The tractor model adapted for ETS 2 was originally taken from the truckers 3 simulator, which indicates its high...