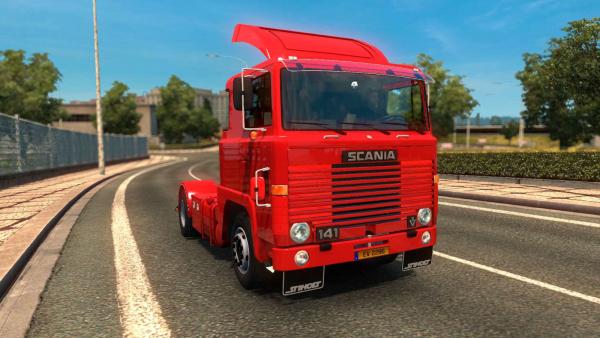 Back in 1972, Scania AB began a new era in its line of business when the first series of commercial trucks was launched. Today, Scania trucks will hardly surprise anyone, and more than forty years ago it was a technical breakthrough when the first copies of Scania 1 Series cars built on two and three axle chassis began to leave the factory’s gates. The truck was first implemented hydraulic cab folding mechanism, which, in turn, was distinguished by good sound insulation, and high reliability and driving performance of the truck significantly ahead of their time. And even today, after so many years, on the roads, along with the modern Scania R700, you can also find representatives of the first series.

The mod of the Scania 1 Series tractor for Euro Truck Simulator 2 is made in high quality, an excellent three-dimensional model with high-quality textures simply blur the line between the virtual prototype and a real existing car. The player will be pleasantly surprised by the number of components and assemblies, including seven types of two and three axle chassis, three cabs, the same number of gearboxes and six engines with prescribed factory characteristics. In any garage of the ETS 2 simulator, a trucker can tune his steel horse, for this there are corresponding slots for decor elements, stickers, logos, lighting equipment and other items. The excellently recreated interior of the cabin, which also has attachment points for placing suitable accessories, will allow gamers to enjoy a pleasant ride in a rare truck for long hours. In addition, there are several branded bright skins that convey the atmosphere of their time.

Later, for the last two versions of the modification, the developers made an addition in the form of BDF trailers, which can be downloaded from the links below:

Dear user of the site, carrying out the transportation of goods on the virtual roads of Europe, for a variety of gameplay, do not forget to download and install new maps for any version of the simulator ETS 2!
Scania tractor truck
Previous modNext mod