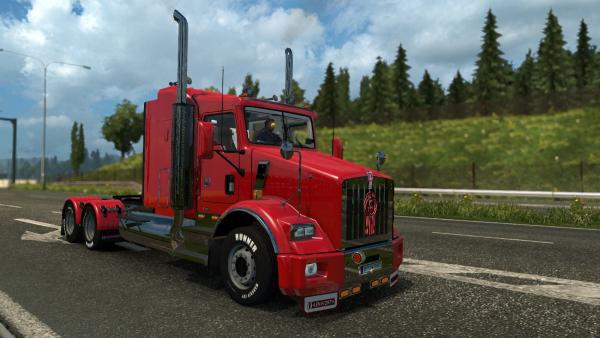 Popular American tractors with engine compartment Kenworth T800 have been plowing the expanses of the globe for many years. Manufacturers were not limited to the production of tractors, trucks, special vehicles and other representatives of the wheel family were produced on the basis of the car for the work of transporting goods both over long distances and for technical services inside cities. A distinctive feature of such machines is the equipping with engines operating on liquefied natural gas, which increased environmental friendliness during operation.

The shining chrome mod of the Kenworth T800 truck for Euro Truck Simulator 2 was transferred from the Truckers 3 simulator, thereby collecting all the qualitative characteristics of the model. The technical arsenal includes several gearboxes, eighteen engines with an original set of sound effects prescribed. The truck is suitable for completing the tasks of any company, including the transportation of road equipment of the author's supplement: road works company. Three options for the interior of the cabin are available to the virtual driver, among which you can find wood-trimmed dashboards. From the exterior, cabin painting and a visual tuning kit are available.