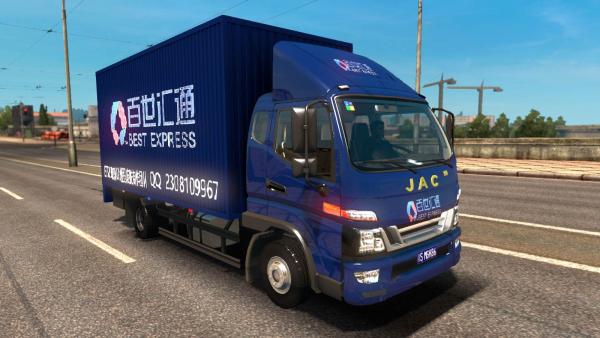 A series of small JAC Junling trucks with a payload capacity of up to three tons is manufactured by JAC Motors, based in China.

The JAC Junling truck mod for Euro Truck Simulator 2 is made in high quality, as it was recreated in the game using a realistic original three-dimensional model, built on a chassis with a 4x2 wheel formula. The cabin has an authentic interior with prescribed animation of instrument arrows, buttons and levers; there is the possibility of adjusting the position of the steering wheel. The authors implemented a single engine and six gearboxes.

The virtual driver of the ETS 2 simulator is available eight characteristic skins and the ability to paint the body in a custom color. With its appearance, the truck will fit perfectly into the world of not only standard European roads, but will look especially colorful and bright on the roads and streets of Chinese cities.

Dear user of the site, carrying out the transportation of goods on the virtual roads of Europe, for a variety of gameplay, do not forget to download and install new maps for any version of the simulator ETS 2!
truck JAC
Previous modNext mod

The mod of the DAF CF85 in the virtual world of Euro Truck Simulator 2 has a realistic appearance. A detailed cabin with full-fledged animation of the cabin, four types of chassis with a 4x2 wheel...

The Chenglong Balong 507 tractor unit, built on a chassis with a 6x4 wheel arrangement, has the only cab option with a driver's berth. The developers realized the original interior with precisely...

Chinese trucks continue their triumphant conquest of the game world. This time, the line reached the FAW J6 series of trucks. The mod included two cab options and several types of chassis. There is...