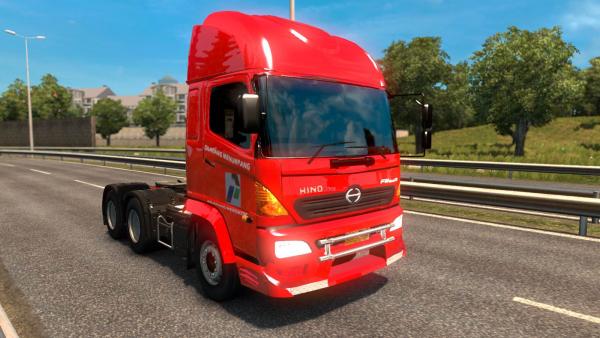 The mod of Japanese Hino Series trucks is quite unique, as it adds several models of trucks from the whole series to Euro Truck Simulator 2, including: SG260TI, FL235TI, FM320TI, FM260TI and FG235TI, complete with original trailers. The authors recreated a pair of cabs with reference to the chassis and implemented a full-fledged animated interior with a right-hand steering wheel arrangement, which adds convenience when driving on Tokyo roads.

When you buy a truck, seven types of chassis are available for the virtual trucker of the ETS 2 simulator, including the BDF type, six engines of various power and five gearboxes at 6, 12 and 21 speeds. The player is expected to have unforgettable trips using updated physics, and to change the appearance of the car, the developers added an impressive set of outdoor tuning items and several colorful skins, including those with the effect of body wear.

Dear user of the site, carrying out the transportation of goods on the virtual roads of Europe, for a variety of gameplay, do not forget to download and install new maps for any version of the simulator ETS 2!
Hino truck
Previous modNext mod

Passenger buses of the Hino RM2 family are implemented in the game using a highly detailed three-dimensional body model and an original interior with a right-hand drive, which will add convenience...

Fashionable car BMW 3-Series E36 from German automobile manufacturers in Euro Truck Simulator 2 is implemented using a highly detailed model. The supplement is not without flaws, but it implements a...