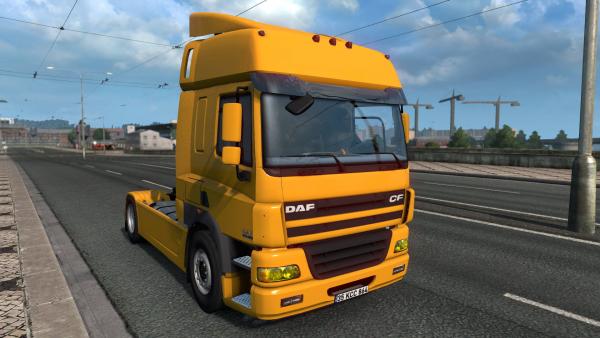 DAF CF range of trucks from DAF Trucks, based in the Netherlands. Trucks are produced on a chassis with two, three and four axles in various modifications, such as tractors, trucks and construction equipment, and adapted for operation not only on asphalt and dirt roads, but also in off-road conditions.

The DAF CF85 truck mod for Euro Truck Simulator 2 is made in high quality, the authors recreated the original interior with full animation and a detailed cabin. When buying at the DAF dealership, the ETS 2 simulator player is given a choice of four types of chassis with a 4x2 wheel arrangement and three 8x4 versions for BDF cargo (you can use additional trailers: VAK BDF or BDF Tandem Pack), four types of engines with power from 381 to 530 horsepower and a pair of 12 speed gearboxes. In addition, there is an original body kit, external tuning and add-ons are supported: DLC Cabin Accessories and DLC Flags!

Dear user of the site, carrying out the transportation of goods on the virtual roads of Europe, for a variety of gameplay, do not forget to download and install new maps for any version of the simulator ETS 2!
DAF truck tractor
Previous modNext mod

Extensive functionality that allows the player to install a new updated BDF frame on his truck. After modification, the virtual trucker will be able to transport goods on new types of trailers in...