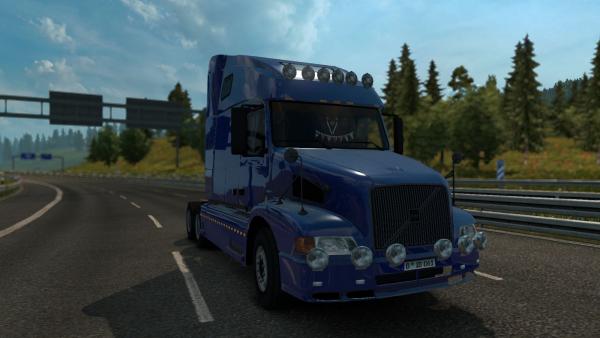 A Swedish-made VOLVO VNL tractor glittering with chrome, one of the prominent representatives of the engine compartment engines of the engine compartment of European automobile manufacturers. The new cab design was developed by engineers specifically to conquer the US automobile market, this is evidenced by the huge amount of interior space of the cabin and the driver’s rest compartment with everything necessary, which makes the truck look like American trucks.

The mod of the Volvo VNL 660 truck for Euro Truck Simulator 2 has a rather modest set of tuning, however, this drawback more than pays for a large number of attachment points for additional light elements, which allows the player of the ETS 2 simulator to turn his truck into a sparkling miracle of technical thought. From the technical fillings, two gearboxes and a pair of engines with a capacity of 540 and 600 horsepower are available to the virtual trucker. The interior of the Volvo is very clearly designed, and includes a precisely recreated dashboard, an original steering wheel, bed linen on a stove bench and the possibility of placing curtains.

The Volvo VNL 670 bonnet truck, jointly developed by the American subsidiary and the European department of the concern, was developed for North American countries, which can be understood by...