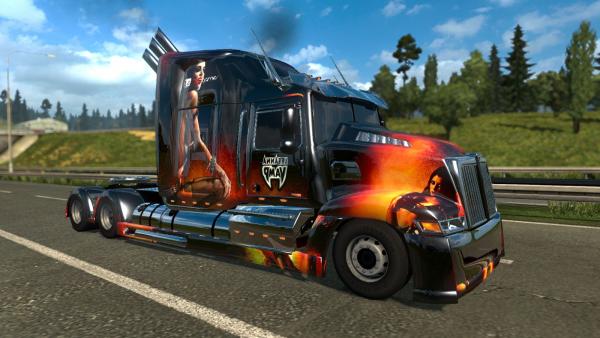 Futuristic truck Optimus Prime impresses with its splendor, rapid design and a peculiar coloring of the body speaks about the fantastic roots of the car. The car does not have a real prototype, but the authors took as their basis the truly existing Western Star 5700 truck. Ardent fans of animated films, comics and computer games about transformers will be very glad to see their hero in the ETS 2 simulator.

The mod of the fantastic Optimus Prime truck for Euro Truck Simulator 2 turned out to be of high quality, thanks to the efforts of the developers of the add-on. The clear, swift lines of the cab emphasize the cosmic features of a truck more suitable for participating in car shows, rather than transporting heavy cargo and trailers. At the proper level, the created interior of the cabin impresses virtual truckers with its wealth, and is more reminiscent of the interior decoration of an elite supercar than an iron hard worker. For lovers of tuning, you should not look for anything interesting, since the set of additional elements is very modest, however, bright coloring and an abundance of chrome parts will more than cover this disadvantage.

Dear user of the site, carrying out the transportation of goods on the virtual roads of Europe, for a variety of gameplay, do not forget to download and install new maps for any version of the simulator ETS 2!
truck tractor Optimus Prime
Previous modNext mod

Brand luxury car Jaguar XJ will amaze players with the quality of performance. Finely recreated swift lines of the body and rich interior trim will cause a lot of delight. Separately, it is worth...