What is password for extracting the file in winrar Can tell pls...
WE IN VK
SUBSCRIBE
Mods for ETS 2 simulator / All trucks / World trucks / Galvatron TF4 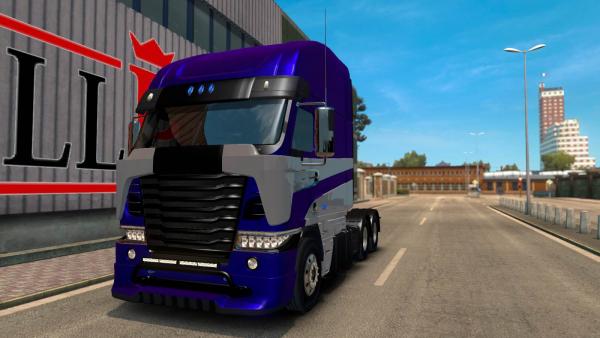 The creation of the Galvatron TF4 truck was inspired by the authors of the science-fiction movie: Transformers 4. The car was created on the basis of the American tractor Freightliner Argosy and has a characteristic futuristic cab design.

The mod of the Galvatron TF4 tractor for Euro Truck Simulator 2 is built on a chassis with a 6x4 wheel arrangement, is equipped with thirteen engine options, up to 600 horsepower, six gearboxes with a different number of stages and several sets of wheels. The developers complemented the modification with an original interior with high-quality prescribed animation, and a set of their own sound effects for each type of engine. Unfortunately, the truck has practically no possibility of tuning, but the brutal appearance of the car will not leave indifferent fans of the ETS 2 simulator.

Dear user of the site, carrying out the transportation of goods on the virtual roads of Europe, for a variety of gameplay, do not forget to download and install new maps for any version of the simulator ETS 2!
Galvatron truck tractor
Previous modNext mod