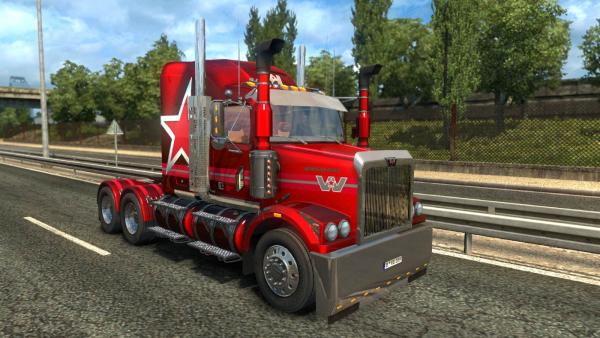 Western Star 4800 trucks are the forerunners of the 4900 series trucks. The chassis of the car is very versatile, which allowed them to produce not only tractors, but also special equipment, such as road and construction equipment, snowplows, concrete mixers and other vehicle modifications.

The Western Star 4800 truck mod for Euro Truck Simulator 2 is designed on a tractor chassis with 6x4 and 8x4 wheel formulas, the authors have implemented thirty-five proprietary engines with power from 380 to 720 horsepower and six gearboxes at 7, 13 and 18 speeds. A virtual trucker has the opportunity in any of the garages of the ETS 2 simulator to use original spare parts for external tuning from the rich set included in the add-on kit. In addition, the mod boasts a successful selection of a characteristic soundtrack, and to the smallest detail worked out by the authentic animated interior of the cabin.

Dear user of the site, carrying out the transportation of goods on the virtual roads of Europe, for a variety of gameplay, do not forget to download and install new maps for any version of the simulator ETS 2!
Western Star truck tractor
Previous modNext mod