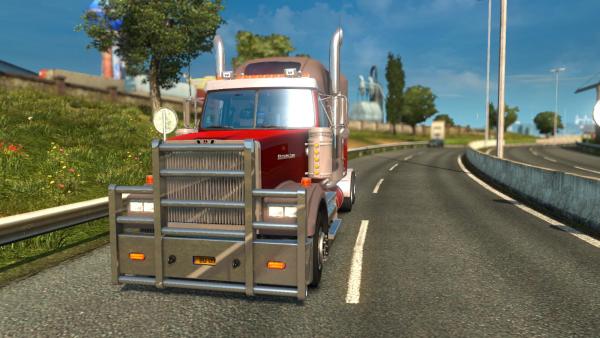 The heavy Western Star 4900 main tractor is notable for its incredible power. The truck manufactured by Western Star has typical American features, as evidenced by its huge size, engine compartment under hood and an abundance of chrome. Trucks are famous for their amazing power, and are able to transport heavy and oversized cargo over long distances.

The mod of the Western Star 4900 main truck for Euro Truck Simulator 2 repeats its real prototype to the finer points, and is technically quite well packaged. Among the components, a virtual trucker can choose for his car two types of chassis with wheel formulas 6x4 and 8x4, seven gearboxes with a different number of speeds, three cabs and several engines of varying power. When buying, the driver can choose a color scheme for his future steel friend. In the ETS 2 simulator, the player is available with a set of spare parts, the number of which is very large, among them fuel tanks, original flashing beacons, side skirts, bumpers and many other optional items. And for fans of reading on vacation on the road, interior lighting is provided.

Dear user of the site, carrying out the transportation of goods on the virtual roads of Europe, for a variety of gameplay, do not forget to download and install new maps for any version of the simulator ETS 2!
Western Star truck tractor
Previous modNext mod

Fantastic Optimus Prime truck with a fast-paced design, an abundance of chrome elements and bright colors will appeal to all fans of transformers. The car is made in excellent quality, the...