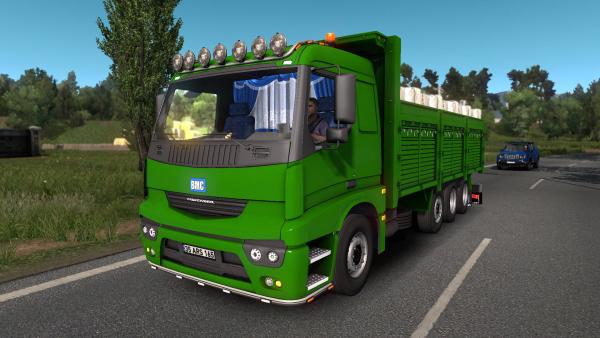 BMC Pro 827 trucks from the Turkish automotive company BMW are known in many countries of Eastern Europe, where cars are widely used. The car looks very similar to the BMC Pro 935, but the technical part has many significant differences.

Mod truck BMC Pro 827 for Euro Truck Simulator 2 is equipped with a 350 horsepower engine and eight-speed gearbox. The original interior of the cabin has lighting, animation and support for the placement of accessories in the cabin. The authors added a small set of tuning items, with which the player simulator ETS 2 will be able to give his truck an original appearance.

Dear user of the site, carrying out the transportation of goods on the virtual roads of Europe, for a variety of gameplay, do not forget to download and install new maps for any version of the simulator ETS 2!
BMC truck
Previous modNext mod

New mod realism SiSL's City Lighting is designed to improve the perception of the night cities of the game world simulator ETS 2. The new lighting replaces the emitted light of the masts of urban...

The interior of the cabin, for the players of the simulator, is far from last, so a group of developers created a new mod that complements the DLC Cabin Accessories with a large number of new items...