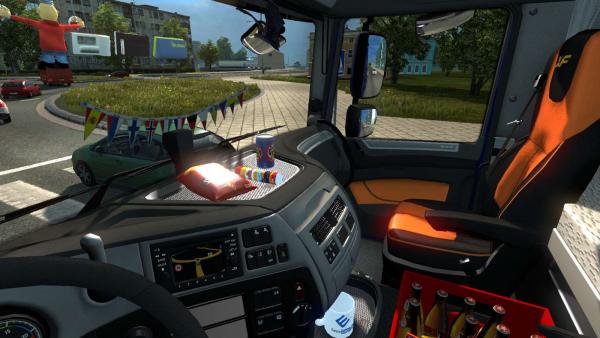 In the latest current versions, the developers of the ETS 2 simulator added the ability to decorate the interior of the driver's cab to their taste with the help of DLC Cabin Accessories. SCS Software team has implemented many different items, including sunglasses, a compass, dog with moving heads, a wallet and much more. But this was not enough for the fans of the game, so the efforts of several authors created a new, additional, modification with even more objects.

Mod Addons for DLC Cabin for Euro Truck Simulator 2 works not only with standard tractors, but also trucks of other authors. The trucker will have a difficult choice from a huge assortment of new elements of internal tuning. In the garage or car dealership, the player can place shelves, cigarettes, cans of drinks and much more in the cabin, and even stick various types of devices, flags and stickers on the glass, since there are a large number of attachment points for this. And for lovers of apple products, even iPhone 6 has been prepared.

Big pack of tires and wheels

The unique look of the truck, one of the main tasks of the player of the ETS 2 simulator, which can be given by a large number of add-ons from many authors. A trucker can add original skirts,...