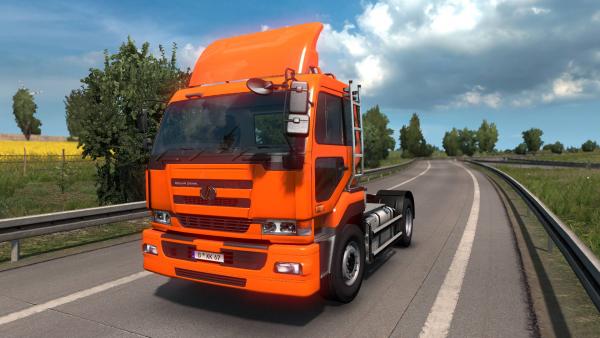 A series of Japanese trucks Nissan Diesel Big Thumb was produced from 1990 to 2008. Initially, the truck was focused on the domestic market, but was later reoriented to export. In the period from 2000 to 2002, the truck underwent modernization, so that it outperformed its competitors such as the Mitsubishi Fuso Super Great and Isuzu Giga.

Mod truck Nissan Diesel Big Thumb for Euro Truck Simulator 2 has an independent registration. Thanks to a detailed three-dimensional model, the truck in the ETS 2 simulator looks photographically realistic. The author recreated the original interior with the right-hand drive and full animation of instruments, knobs, switches and levers. The new tractor has a 4x2 biaxial chassis, nine engine options from 420 to 750 horsepower and eight gearboxes at 6 and 12 speeds. Easy and comfortable controls are provided by our own physics, and a set of original sounds adds realism to the gameplay. In addition, a pretty good set of tuning accessories has been prepared for the virtual trucker.

Dear user of the site, carrying out the transportation of goods on the virtual roads of Europe, for a variety of gameplay, do not forget to download and install new maps for any version of the simulator ETS 2!
Nissan truck tractor
Previous modNext mod