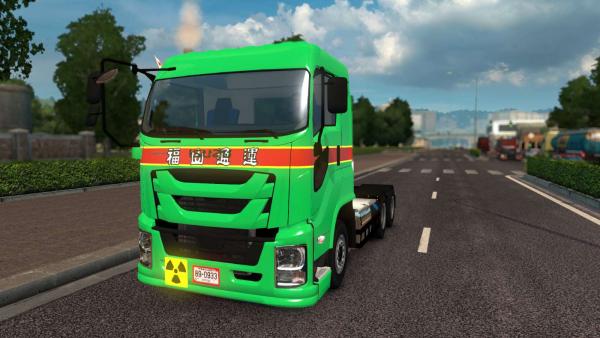 The Japanese commercial truck Isuzu Giga first rolled off the assembly line in 1994. The car was intended for operation in various fields of activity, therefore, depending on the destination, it was equipped with various types of engines, including the Euro 5 environmental safety standard.

The mod of the Isuzu Giga truck for Euro Truck Simulator 2 has a couple of cab types and several chassis options with 4x2, 6x2 and 6x4 wheel formulas. The tractor can be equipped with one of seven engines from 294 to 680 horsepower and select a suitable gearbox for six, twelve or sixteen speeds. The player of the ETS 2 simulator will be pleasantly impressed by the quality of the interior, which is present in two variations, and the right-hand drive version of the cabin will allow you to comfortably transport goods along the streets of Tokyo and the roads of other countries with left-hand traffic.

Dear user of the site, carrying out the transportation of goods on the virtual roads of Europe, for a variety of gameplay, do not forget to download and install new maps for any version of the simulator ETS 2!
Isuzu truck tractor
Previous modNext mod

The Isuzu NPR 400 truck from Japanese automotive manufacturers will pretty well join the virtual world of Euro Truck Simulator 2. Built on the frame of a truck tractor, the car has a single cab type,...