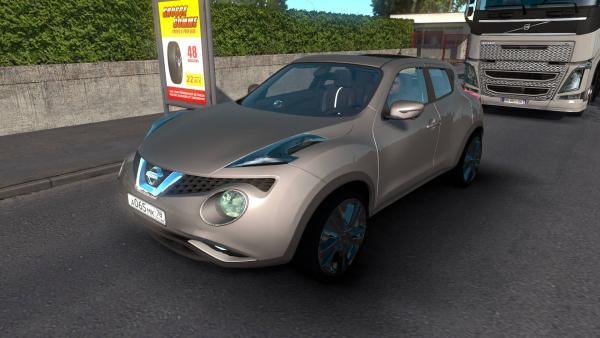 A small urban crossover Nissan Juke is produced by the Japanese company Nissan since 2010. In popularity, the car is on a par with Nissan Qashqai, among motorists.

Mod car Nissan Juke for Euro Truck Simulator 2, exactly repeating the original, made in very decent quality. When creating it, the authors used a high-quality three-dimensional model of the body and a detailed original interior of the cabin with key animation. Players of the ETS 2 simulator will appreciate the 4x4 all-wheel drive, a couple of engine options, a six-speed gearbox and two sets of branded alloy wheels.

And for fans of Russian maps, such as Eastern Express, and the like, the developers added a Russian car number, which can be downloaded from this link. But when connecting a license plate file, it should be located above the main mode.

The Spanish passenger car SEAT Leon III in the gaming world of the ETS 2 simulator has a photographic resemblance to a real prototype. The mod was created using a highly detailed three-dimensional...