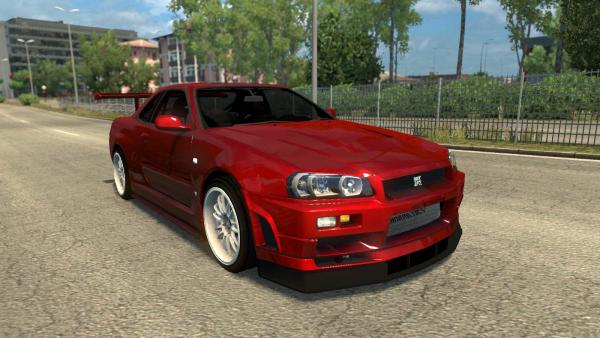 The sports version of the Nissan Skyline GT-R, which was produced from 1999 to 2003, differs from the base model by an improved suspension, a more powerful 280 horsepower engine and a six-speed gearbox. The car was produced by the famous Japanese automobile concern Nissan Motor.

The mod of the Nissan Skyline R34 passenger car for Euro Truck Simulator 2 is recreated on the basis of a realistic three-dimensional model, there is an original detailed interior with characteristic animation. The author added an engine and gearbox with genuine characteristics that can be tested on the racetrack of the ETS 2 simulator. Unfortunately, the car does not have tuning, however, the car is equipped with branded wheels with low profile tires.

In the latest version of the mod, from the author of Metin Tinaz, the car has two suspensions, a pair of engines with a capacity of 316 and 640 horsepower with new sounds, three types of interchangeable front and rear bumpers, door sills, spoilers, replaceable taillights and a large assortment of exhaust pipes.

Dear site user, for cargo transportation by passenger car, do not forget to download and install the mod Passenger trailer for all ETS 2 simulator versions!
cars Nissan
Previous modNext mod