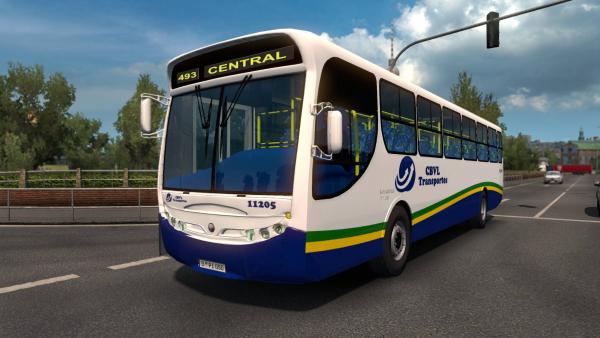 The city bus Caio Apache VIP I was mass-produced by the Brazilian company Caio Induscar, specializing in the production of passenger vehicles. The production of transport was carried out on a two-axle VW Volksbus 17.230 chassis, from 2001 to 2009, its body, like the MAN Triton 2016, has three pairs of folding passenger doors.

The Caio Apache VIP I bus mod for Euro Truck Simulator 2 was created using a high-quality three-dimensional model, the authors recreated the original interior with full animation and prescribed realistic characteristics. The ETS 2 simulator player has access to a single engine with 225 horsepower and four gearboxes, of which two are mechanical and a couple are automatic. In addition, the developers added to the modification a set of their own sounds and two branded skins.

Dear user of the site, for passenger transportation by bus, do not forget to download and install Passenger mod for all ETS 2 simulator versions!
bus caio
Previous modNext mod

For lovers of passenger vehicles in the Euro Truck Simulator 2 appeared comfortable tourist bus Neoplan Tourliner. When creating the mod, the authors used a realistic three-dimensional model of the...

The 2016 MAN Triton city bus, invented by the authors of the OMSI 2 simulator, has a choice of two engine types and four types of gearboxes. own skins significantly diversify the body color. The...